How Does Laser Welding Work?

Understanding the process of laser welding can be intense and somewhat confusing, especially if you are just getting acclimated to this welding application type. To get started, let’s first address how a laser works and why they may be useful in a welding setting.

Lasers use photons, or light particles, to heat metal up to the point where it can be changed from a solid to liquid state, which then allows the liquid material to flow together and re-solidify resulting in a bond. These light particles are all part of the electromagnetic spectrum, and different colors of laser light are simply different wavelengths on that spectrum.

Different materials have different reflective properties and coefficient of absorption, which is why we may use different wavelengths (or colors) of laser light for different applications.

Laser stands for Light Amplification through Stimulated Emissions or Radiation. All light is radiation, including the light bulbs in your room, computer screens at work, and even your WIFI.

The question is, what does light have to do with welding?

A laser generator uses electricity to emit photons and excite them until they reach a specific level where they are emitted into a delivery system, like a fiber optic. In welding, the fiber optic and the optics have to be robust enough not to melt down from the power density of sometimes six to twelve kilowatts of laser power traveling through a fiber glass that is only half to one millimeter thick.

Laser light is coherent light, meaning light of similar wavelength traveling in phase and in a similar direction. We call the differences in direction the divergence angle. For this reason, we need to manipulate the light and we use optics to do so. Optics can be extremely pure curved glass or it can be polished and curved mirrors made of materials such as brass. 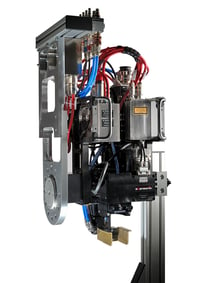 the divergence, they run it through a series of lenses in a controlled manner called a collimator. This is often done at a distance that allows the size of the beam to get as large as one and a half to two inches. This is useful to keep the heat density spread out as the light passes through the glass, so that the glass doesn’t burn, etch, or change shape.

The optic will then use mirrors, and beam shaping lenses if needed for the application, and finish manipulating the light by passing the beam through a focal lens system. There are often special coatings on these lenses to make them more transparent to specific frequencies of light. There are often disposable cover glasses used to protect the precision collimator and focal lenses. It is crucial when dealing with this kind of power to keep the optics clean and cool. As the light hits the metal and the metal heats up, the end product is a welded joint.

The laser welding process is one thousand times touchier than a typical welding process, which is something many people do not understand. Many operators can get themselves into trouble when using laser welding equipment due to a lack of knowledge, which then creates a bad reputation for lasers as a whole. In the last five to ten years, manufacturing has embraced lasers in significantly more welding processes, meaning those who work closely need to be educated accordingly to ensure the process runs efficiently.

Lasers today are modular, easier to maintain, and ultimately more efficient. Years ago, the most efficient laser was about ten percent as efficient as today’s equipment. For every ten thousand watts that you put in, you would get one thousand watts out. Today, they are more like fifty percent efficient, so the running cost is a lot lower.

Laser welding is a tool in the toolbox. It’s good for a lot of applications. Historically, if you were a car manufacturer and you’re making a trunk for a car, it’s way cheaper to make that trunk in two separate pieces than it is to stamp one piece and ship that from plant to plant, which is a giant assembly and just doesn’t make sense to package it that way. It has been very attractive for auto manufacturers to make their trunks in two pieces and then laser braze them together. They also laser braze roofs onto the tops of automobiles and have done an excellent job making the weld along seams liquid tight. These are just a few applications that everybody knows laser works really well with.

With that, there are a ton of applications that haven’t really tried using laser welding yet. Some of the smaller shops especially. When you put a laser on the end of a robot, all the sudden you have an extremely flexible tool for welding. You don’t have to have access to both sides of the workpiece to do a laser weld, you only have to hit it from one side.

Once your team is trained and understand the intricacies of laser welding, you will be on your way to a true change in production efficiency.

Interested in learning more about the laser welding applications from ABICOR BINZEL? Check them out here.