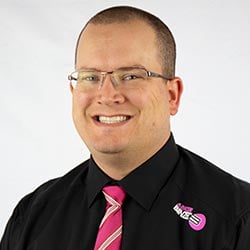 Well, that’s not typically the case.

Your fume extraction filter matters a lot. So much so that you should actively be looking at what is being promised to you by filter makers to ensure you’re getting the kind of air cleanliness you expect.

With this mind, let’s identify these important aspects of fume extraction filters and review them in detail.

How Your Fume Extraction Filter Works

Your standard filters for fume extraction have four means of capturing particles:

This is generally how your larger particles, your 1 micron size and up, the particle itself, as it's traveling through the air, has enough inertia that when it impacts the fibers of your filter it sticks.

This process is where metallic particles are small enough that they don't carry that inertia. They'll actually follow the trail of the gas through the filter, and as they come around the strands in the filter, they're going to get captured on the sidewall. 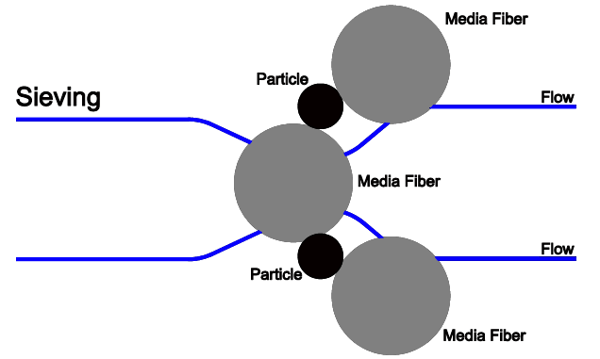 In this particle capturing scenario, the fibers in your filter are close enough together that the particles can't physically fit through.

What you get below the 0.3 microns is diffusion. These particles don't have enough inertia to break away from the flow of the air, or the gas, to impact the fibers, and they don't necessarily flow with the gas.

These particles kind of bounce around like a ping pong ball, and by doing so, as they go through the filter media, they have a really turbulent flow pattern and they tend to get captured inside of the fibers of the filter. This motion of particles is similar to the Brownian Motion.

Your 0.3-micron metal particle is the most difficult because it kind of lands between the size large enough for impaction and the size small enough for diffusion. This is why HEPA filters are all based off of that 0.3-micron size.

The chart aside from Donaldson Filtration Solutions is interesting because what it shows is that above your 0.1-micron inertial, sieve, and interception, filtration mechanisms are capturing the particles. But as the particles get smaller, they are captured due to diffusion.

A big point to know regarding your fume extractor is that the filters are cleanable, and of course replaceable, unlike your residential HVAC systems that are simply replaceable.

Generally, to maximize the surface area, the filter media is pleated.

The most common materials used to make fume extraction system filters are:

You get a little bit better efficiency with the PTFE coating, but equally as important, you generally get better cleanability. Most fume extractors on the market today will use compressed air in pulses to backflow the filters, which works by blowing the particles back off of the filter and into a collection area either automatically or with a manual wand as shown in the image. 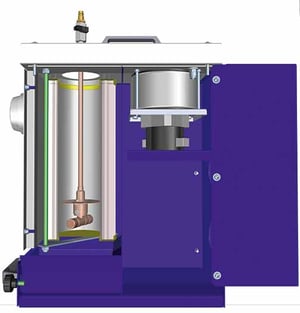 Generally speaking a PTFE coating on your fume extractor filter is more ideal because you can get better efficiency and better cleaning. With other materials such as the nanofiber filters with the Spun-Bond Polyester construction, they capture particles very well, but tend to clog up faster. This is especially true if you’re welding on very oily metals.

What Do These MERV Ratings Mean for Fume Extraction Filters?

When talking about the industry standard for fume extractor filters in terms of efficiency, we use a rating method called the MERV rating, which stands for Minimum Efficiency Reporting Value. The most commonly used in fume extraction welding would probably be a MERV 13 rated filter, and at the top of the scale for the welding industry would be MERV 15 and 16.

ASHRAE, short for the American Society of Heating, Refrigerating and Air-Conditioning Engineers, holds the standard for measuring the fume capture in MERV. There are other standards, such as the German IFA standard, but in terms of efficiency, the most commonly used in the United States would be a MERV rating.

Beyond the MERV rating would be a HEPA rating, short for High Efficiency Particulate Air filter rating. These filters are rated to be even more efficient than MERV. With the MERV rating, the ultimate goal is to get these fume particles away from the welder and away from personnel.

For the MERV ratings, generally, the higher the rating, the better.

A higher efficiency filter would generally be considered a better filter, but there is some trade off. The higher the efficiency, the faster the filters clog up, which means more cleaning and sometimes replacement.

So, what do all these ratings mean for fume extraction? MERV and HEPA, and MERV 13 versus MERV 16. Is it strictly a matter of efficiency?

Yes, it is! Of the particles created through the welding process, how much of that are you going to be able to capture to avoid your welders, and your other personnel, from breathing them in.

Process matters a lot when it comes to filter life, as well. One particular study showed there was a fume formation rate of globular GMAW that was 2.7 times greater than that of spray, which was in turn 1.4 times greater than pulsed.

When you get into welding stainless steel, for instance, you start releasing particles like the hexavalent chromium, which is very dangerous to your health to be inhaling. Welding galvanized also exposes welders to these harmful particles, it's in your best interest to choose the best filter you can obtain.

Fume extraction filter ratings are an efficiency rating according to a micron size. If you're welding with standard carbon steel, you can probably get away with filtering less because you're exposed to less dangerous particles.

How Long Do These Fume Extraction System Filters Last?

That factors that impact the lifespan and effectiveness of your fume extraction filter include:

At a very basic level, the more particles the filter's capturing, the faster it's going to fill, but there are other factors involved. The size of the filter has a big impact on your filter performance, for instance.

If you look at our IndustriFume™ filters and cut the filter material out and lay it flat, you have 275 square feet of filter area. If you compare that to another filter with only 50 or 60 square feet of filter area, obviously the smaller filter is going to fill up faster. Efficiency-wise, you’re going to capture more particles. The larger filter area will also reduce your energy consumption as a result of the decreased airflow restriction compared to a smaller filter.

Whether your system has multiple filters to achieve a large surface area, or one very large filter, when comparing fume extraction systems, you want to look at filter size and surface area. That's why they're constructed with the pleats (shown in the image), to pleat them is to maximize the surface area and hence make sure they last as long as possible before cleaning or eventually needing replacement.

Anytime you see a filter efficiency rating that does not reference a specific particle size, or a more recognized rating such as a MERV or HEPA rating, then it needs to be questioned. There are lots of filters rated at 99.9% efficiency, and that's all the information they give!

The way studies and proof of performance is worded is another thing to look at carefully. For instance, a company may note their filter being rated at 99.9% efficiency, but if they test at total weld fume mass captured by the filter as opposed to looking at the particles, like the smaller particle sizes, it misleads the performance of the filter. It may capture a lot of smoke, but the truly harmful metal particles will not be captured.

In fact, a lot of these filtration tests use 0.4-micron size or larger because of the difficulty in effectively capturing metal particles below that.

Make sure when you're comparing filter efficiencies that they're all compared on the same level. If they're using a standard MERV rating, then you can do an apples to apples comparison. If it lists a filter efficiency with no specification behind it, question it.

When you're looking for superior filtration, go to the HEPA filters. Because a HEPA rated filter according to ASME, or the US Department of Energy, is 99.97% efficient at capturing 0.3 microns, it captures the most difficult microns to extract. The European Union has multiple HEPA classifications of their own, but they're not recognized by the US Department of Energy.

Does Any Filter Capture 100% of the Micron Particles?

The answer to this is no. With any filter out there, you're still going to release harmful particles back into the air. The absolute ideal scenario for the safety of the employees would be to filter the particles using the highest rated filter available, and then exhaust to the outdoors.

If you have an option to exhaust the fume extractor outdoors, that's your best course of action. But if that's not an option, and it generally is not due to space or financial constraints, filters rated at MERV 16 capturing 95%, or MERV 15 capturing 85%, will do the best job of protecting your workers from harmful weld fumes and micro-spatter.

Anyone looking to upgrade, or install a new fume extractor, would be best-served using the highest rated filter that they can. Any MERV 15 or MERV 16 rated filter is generally very good. 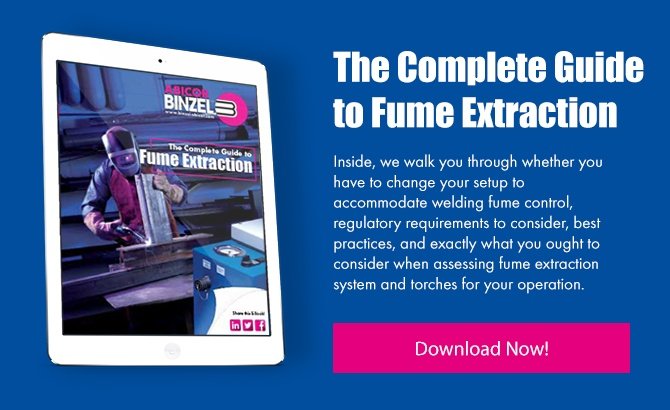