Hard automation in the past has always been about joystick controllers and a birds nest operator controlling the movement of the gantry or positioning system to guide the welding arc through the weld piece. And incorporating seam tracking into this solution? Leave that to the robots.

Today, however, optical seam tracking is finding itself now more than ever a real solution and added value to those hard automation processes, and leading old-school, analog welding operations to look at seam tracking technology in a different light.

Hard automation generally involves very large welds. Typically to execute this plants use tack welds to put everything together then they put the parts through the machines to weld. And to keep the process accurate and repeatable, hard automation companies have historically used tactile probe as a standard solution. But tactile probe has it's issues and limitations in hard automation, most because of the contact point on the probe. With the tack welds that most hard automation solutions use, contact with any tactile based system is inevitable, which throws off the probe and can sabotage the weld, leading to more scrap and rework than what's generally desired.

With harder automation and optical seam tracking, companies use smaller packages with the linear tracks, and put it on multiple types of track or slider systems, and guide it with while achieving a reduction in weight. The reduction in weight might not seam like much of an added value, but consider how that reduction leads to a faster process, more efficiency, and less re-work. That's a lot of added value to the production team.

With hard automation and optical seam tracking, you can control a number of different types of slide packages provided the seam tracking system is capable of exporting a voltage, which makes the solution very user-friendly for integration. The additional benefit of a voltage based system is you can integrate a full product line of slides that a tactile probe would likely not be able to. This also means optical seam tracking can be retro-fitted into existing slides with minimal integration required.

The other area optical seam tracking really helps on the hard automation side is with sub-arc processes. Historically, seam tracking has always had problems merging with a sub-arc automation solutions because there would be too much flux passing through the tracking beam. Systems that sampled the weld joint a single time would have difficulty translating the flux through the sensor. But, with seam trackers that track with multiple lines of sampling across the welding seam and thus produce multiple lines of data, the optical seam tracking tool can overcome the flux beam, filter it out in a manner very similar to weld spatter, and allow the seam tracking system to get much closer to the arc itself with have a better response and more stable tracking process. If you were to use a single line process, the flux running through the track line would likely the sensor trouble translating the flux as a tracking feature, and with tactile probe it would run over the top the flux and move the probe according to the flux and not the weld joint.

Optical seam tracking is also an effective hard automation because it helps to get the operator off the carriage and having to spend the bulk of their time operating the joystick camera. Operating the carriage camera is a pretty inexact science that's very reliant on human interfacing with the hard automation system, and while there are plenty of carriage operators who are phenomenal at driving the camera system, the margin for error is greatly reduced with an optical seam track value add to the process. So instead of an operator sitting in front of two joysticks moving it left to right, the seam tracker will do that for the operator via it's analog interfacing, and leaves the operator far more time to do weld prep, manage the process from the floor, and keep them safer.

Hard automation is the oldest, most storied form of welding automation in manufacturing today. For decades welding operators have used hard automation to streamline and safeline their production process. Some of the best practices in hard automation still date back to the first uses of the process. But it's not a process that can't learn new tricks, and with optical seam tracking now more than ever emerging as an invaluable addition to hard automation solutions, companies could discover a ton of added value with a small addition to their automated package.

Looking for more information on Optical Seam Tracking? Check out our complete guide in our free eBook. 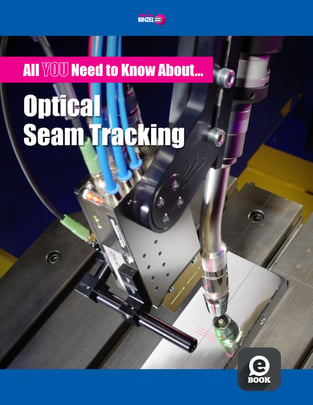