Pickling metal – which treatment is best?

Beautifully crafted railings and staircases made of stainless steel, high-gloss kitchen fronts or building facades that gleam in the sun from afar are already real eye-catchers. To turn a metal into an end product worth looking at, the surface must be treated accordingly. In metalworking, pickling is used in addition to grinding, brushing or blasting. There are different approaches to this, depending on the requirements in the production process.

The term pickling is not only known from metalworking, wood and grain can also be pickled to colour the product or protect it against mould. In this blog, however, we will focus exclusively on metal pickling. Here, pickling means the chemical removal of corrosion layers on metallic surfaces through reactions with the air – commonly referred to as rust – or the removal of top layers from previous work steps with the help of mineral acids. Typical contaminants are polishing residues, greases, oils, residues of other metals or also scale from previous processing steps. The storage of metal also leaves its traces, such as deposited dust or flash rust, which consists of fine iron dust that oxidises in the air and settles on surfaces. So-called mill scale and annealing scale can also be deposited on metallic surfaces. They are produced during the heat treatment of metals.

It is important to remove these residues, deposits or contaminants, as they will otherwise have a negative effect on the following production processes and thus on the end product. Metal pickling prepares surfaces for the next step in further processing such as:

Other options for preparing metal surfaces in the production process are:

Consequences of deposits on the metal surface

Deposits on metal surfaces usually have an oxidic composition, which can contain, for example, iron oxide, magnesium oxide, aluminum oxide, lead dioxide, carbon dioxide or carbon monoxide. These lead to changes in the properties of the component, such as reduced conductivity and adhesion, and even promote further corrosion. If these were not removed before further processing of the metal, this would lead to uneven layer build-up, surface defects and poor adhesion of, for example, coatings in subsequent process steps. The tricky thing about further processing without prior metal surface treatment is that this is not always immediately noticeable in the production process. If this only becomes apparent at the customer's premises, high reworking costs and annoyance are literally pre-programmed. A properly pre-treated surface meets the constantly increasing demands on the surface quality of metals.

Depending on the type of metal and its chemical composition, corrosion can occur on the component surface. Precious metals corrode very slowly. Base metals such as iron, aluminum or zinc, on the other hand, corrode more quickly. If a so-called passivating layer – a non-metallic protective layer only a few nanometres thick – is formed on the component, it prevents the metal from coming into contact with the atmosphere. The metal is thus protected from oxygen corrosion. For further processing of these metals, however, this passive layer or oxide layer must be broken up, which can be done by weak acid solutions or a welding process. This process is also called activation.

To ensure that the protective layer can form again quickly after processing, certain compositions of acid solution or electrolyte solution are used in pickling, which activate rapid passivation with the application of the liquid. The electrolyte solution ABICLEAN from ABICOR BINZEL is such a solution. The protective passive layer destroyed by welding is quickly restored with ABICLEAN. In the same step, the unsightly tarnish resulting from the heat generated by the process is removed from the treated weld seam, giving it a clean surface that shines beautifully on stainless steel.

What happens during pickling?

In the metalworking industry, the focus is on the pickling process, which is usually carried out with a hydrochloric-sulphuric acid solution in varying concentrations – more on this later. Pickling is always applied after the following work steps:

If, for example, iron is used as base metal, the following iron oxides are deposited in layers: 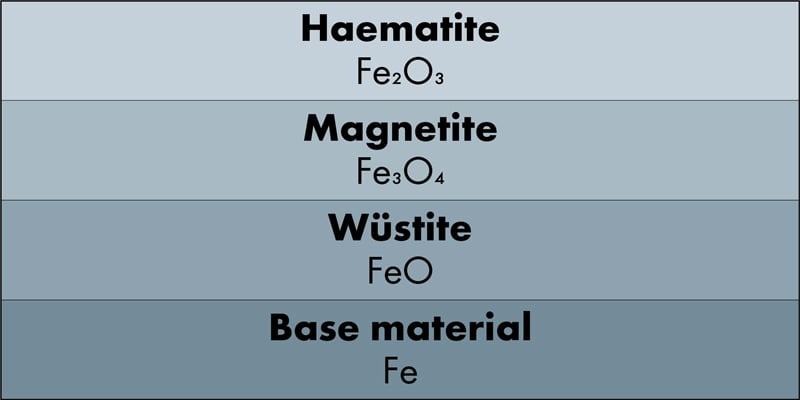 Pickling chemically dissolves or "blasts off" the contaminants and thus the oxide layers of a metal surface. In the process, different chemical and physical reactions take place simultaneously as well as one after the other. When the pickling liquid is applied by immersion, spraying, application with a brush, pumping through pipes or also with electrochemical support, the pickling solution reacts with the deposited oxides.

Composition of the pickling solution

Which mineral acid is used and in which concentration it must be depends on the requirements for the pickled surface as well as the thickness of the oxide layer. The following values apply as a guideline for the acid concentration:

Which acid for metal pickling?

Phosphoric acid is a comparably expensive process and is particularly suitable for removing thin layers of scale and rust. When iron is pickled with phosphoric acid, a thin iron phosphate layer is automatically formed, which immediately passivates the material. A concentration of 10 % is used at up to 40 °C and a concentration of 20 % at up to 60 °C.

Acid mixtures of different acids are used for pickling low-alloy steels and unalloyed steels, as well as for so-called ferritic steels – a highly magnetic type of chromium steel that is used especially in the food industry – and austenitic steels, whose main alloying elements are chromium and nickel. The latter have a high corrosion stability and are easy to form, which is why they are used in medical and dental technology, industrial engineering and automotive engineering. Both ferritic and austenitic steels belong to the precious metals and are particularly corrosion-resistant or corrosion-inert.

The acid mixtures for metal pickling are offered as pickling pastes, spray mixtures and bath pickling.

Disposal of the pickling agent

No matter how much a pickling solution is diluted, it is as harmful to the environment as it is to health and must be disposed of as hazardous waste. The instructions on the packaging of the pickling solution specify exactly how the contents must be disposed of and this procedure must be followed. Sulphuric acid and phosphoric acid, for example, must not be disposed of in residual waste or the sewage system. Although it is widely known that phosphoric acid is also used in very small quantities as an acidifier or preservative in foodstuffs – a very well-known one is Coca-Cola – the human stomach lining counteracts the corrosive property. However, it is difficult to estimate at what point a very small amount of phosphoric acid becomes an acid that is harmful to humans and the environment and must definitely be disposed of as hazardous waste. Since the disposal for hazardous waste can differ regionally, it is important to obtain precise information beforehand in order to comply with regional regulations.

Why does stainless steel need to be pickled?

During pickling, stainless steel regains its surface condition and thus its corrosion resistance.

Metal pickling is an exciting topic!

From our point of view, you should use gentle and surface-friendly pickling processes that also do not pollute the environment. If you do not want to use aggressive or even dangerous pickling processes and pickling agents for your surface treatment after welding, we recommend the equipment and electrolyte solution from ABICOR BINZEL. The acid solution or electrolyte solution ABICLEAN can be used for weld seam cleaning, passivation and polishing of metal surfaces - except for aluminum. The ABICLEANER devices for weld seam cleaning are the environmentally conscious alternative to pickling pastes. With their help, unsightly tarnish can be removed and even sensitive surfaces such as metals made of stainless steel can be passivated in one step. This is also referred to as electrochemical pickling, although the term pickling has a rather negative connotation.

Was this blog helpful for you? Are there any topics specifically related to materials and welding that are of particular interest to you? Feel free to contact us if you have any questions or suggestions. We look forward to your comments.

See you soon and …