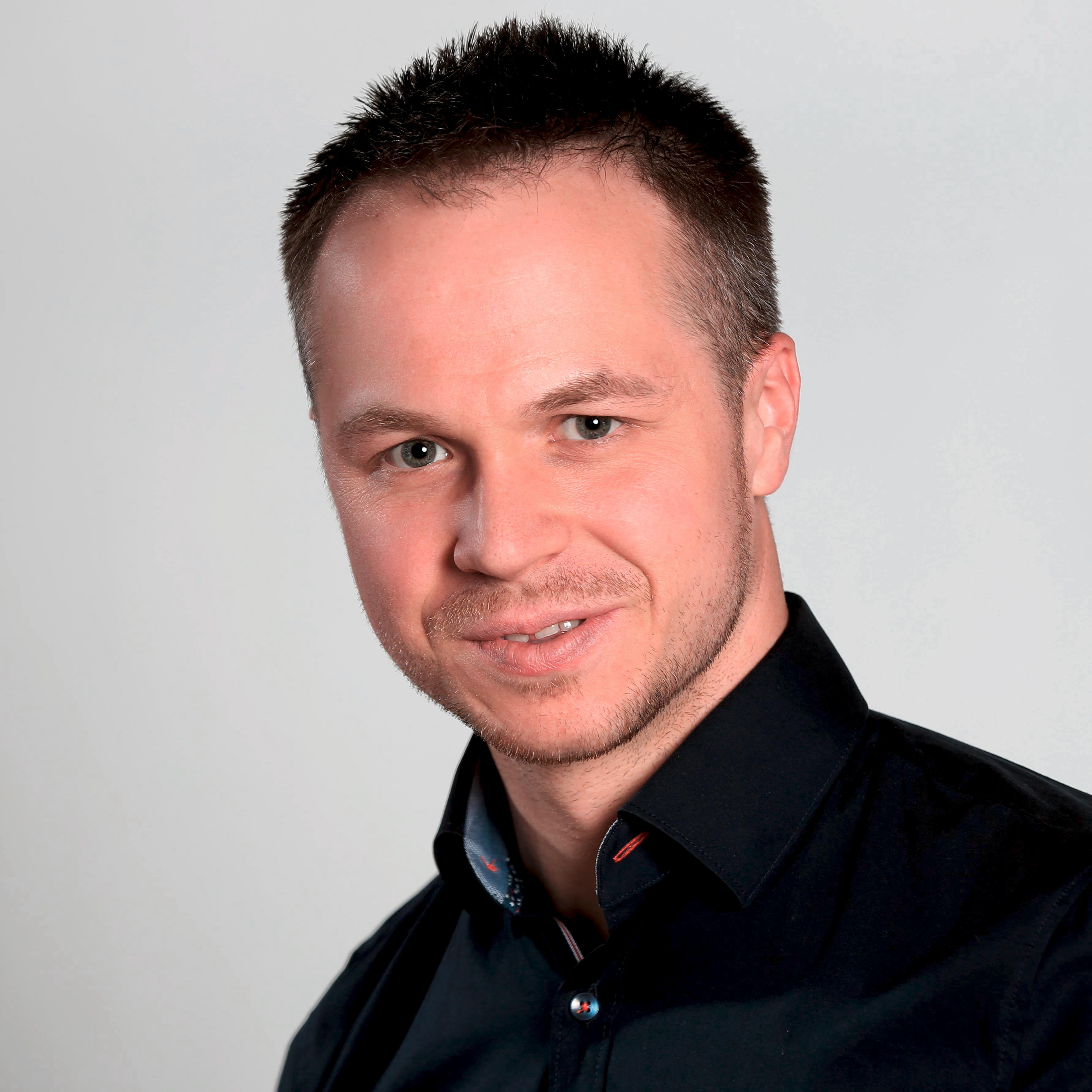 The valve is opened and there it is: the shielding gas for welding. Depending on the requirements of the welding task, the gas pressure and gas quantity are still set with the manometer before starting. Pre-flow time? Rather a little longer. Better safe, than sorry. The same applies to the post-flow time. Whether this lasts a few seconds longer or not does not seem to make much difference. Or maybe it does? The fact is: the shielding gas consumption is usually much too high. With the gas management system EWR 2 you can save money in gas shielded arc welding.

There are various reports of different savings potentials. Welding power source, welding torches, wear parts, filler material ... the price of these products is widely known. And you will certainly check regularly where further costs can be saved. Do you also know how much you have to pay each year for your mixed gas, which you mainly use for gas shielded metal arc welding? Calculated on an annual basis, it can make you quite dizzy looking at the gas consumption for gas shielded arc welding. Gas is always available. Gas is so obvious that it quickly fades into the background. But gas is also a cost factor which can be very high, depending on the type of gas used. There are even regional differences in the costs of shielding gas for welding.

However, this is generally the case with welding: Once the shielding gas consumption is set, it flows constantly until it is switched off again. There is a general risk that the gas flow rate is too high and that a lower gas flow rate would actually provide sufficient shielding gas coverage. The EWR – short for Electronic Welding Regulator, now in its second generation and available from ABICOR BINZEL gas management system EWR 2 – controls the gas flow rate synchronously and dependent on the welding current.

Optimum gas coverage with the EWR 2

According to the requirements for the respective welding task, the EWR 2 can calculate the exact gas flow required. This means, if you are welding with a low welding current, the gas flow will be low, too. If you weld with a higher welding current, a higher volume flow is required, which always protects the arc optimally from oxygen. Such a precisely adjusted inert gas shielding can never be achieved with a manual regulator. This means: without EWR 2, gas consumption is relatively high. And the gas shielding is not constantly ideal.

The highest gas consumption is reached, when the solenoid valve in the power source or in the wire feeder opens as soon as the arc ignites. The shorter the welding intervals, the higher the gas consumption. This is particularly relevant for tacking or stitch welding. Of course, there are often exact specifications regarding which gas flow must be used for the welding task, and these need to be adhered to accordingly. In this case, the savings potential in gas consumption is at the beginning of the welding process, at the so-called starting tip, and in the duration of the post-flow.

The savings in shielding gas consumption with the EWR 2 will be achieved in three phases:

In this way, the gas consumption of, for example, mixed gas M21 (argon with 18 % CO2), can be reduced by up to 60 %. A fast and precise electronic valve prevents the starting peak of the gas flow, where in other systems without this control a lot of gas is wasted. The electronic valve also closes very quickly, which means that gas is also saved here.

The following graphics show the effect in the different phases of the welding process. 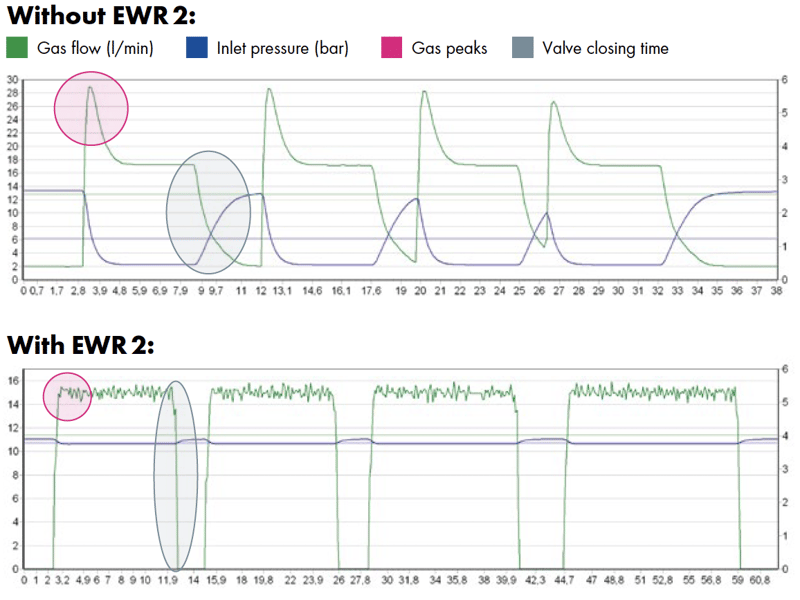 Although the gas-saving device EWR 2 is mainly used in MIG/MAG robot welding, more than one third of the EWR 2 sold in Germany have already been used at manual welding stations. Since there is a fear that blockages will not be recognized in time and that too little gas flow could result in pores, the gas flow is often increased at this point. This also shows the enormous savings potential, especially for manual welding. In a three-shift operation, welding times of nine to ten hours are common practice. Based on an example of automation, up to 870 kg CO2 can be saved per year using a classic mixed gas with 82 % argon and 18 % CO2 with an EWR 2 unit.

Details on shielding gas consumption with EWR 2 – the new generation

The EWR 2 has a closed control circuit so that the correct volume flow is always ensured. The system works reliably even when the ambient temperature fluctuates or when it is mounted overhead on a gallows or similar. The throttling effects caused by the movement of cable assemblies are also compensated. Furthermore, the gas flow is always precisely matched to the welding process. Of course, the EWR 2 can also be used for TIG welding without any problems.

The savings potential of EWR 2 at a glance:

What makes the EWR 2 gas management system so valuable is the enormous potential for saving gas consumption and the fact that there is no loss of weld quality. Often the weld seam looks even better.

In many industries, every welding process must fit exactly. Errors in flow velocity, gas volume flow or pressure are not distorted, because they are directly noticeable in the appearance and quality of the weld seam. Thus, sometimes parts are directly scrapped, if the shielding gas flow is not correct. This can be prevented simply and safely with the EWR 2 from ABICOR BINZEL and saves gas at the same time.

If you work with mixed gases containing CO2, a reduction in the consumption of shielding gas also reduces CO2 emissions! Thus, if you reduce your shielding gas consumption by 50 % with EWR 2, you directly reduce the CO2 pollution for the environment by 50 %. By using this electronic welding regulator you make a valuable contribution to our blue planet.

However, it is not only the shielding gas consumption that is saved, but also the kilometres traveled and the diesel consumed by the truck that regularly delivers the gas. For example, this truck only has to drive to your company once instead of twice a week.

Therefore ... do not hesitate any longer and get EWR 2 into your welding production to test it yourself. You will be as enthusiastic about the quality of the weld as you will be about the direct savings in shielding gas consumption. What are you waiting for?