What is Welding Fume?

What is welding fumes? We all have an idea of what is welding fume. It is obviously coming from molten metal that you create when you're welding. The mixture of the welding smoke is changing from one process to the other, but overall, it's a mixture of very fine particles and gases.

The metal particles of weld fumes are so small, they're in the micron size. That makes them so small that you can not see them individually, though you can see them when they're all together. It is so small that it floats in the air for a long time and rises with the ambient air, and that's one of the reasons why welding fume are so hard to control and critical to control.

We hear a lot now about the N95 mask in the midst of the Coronavirus. In order to filter welding smoke, you would need an N95 or better filter to actually capture the small particles in the welding smoke. That tells you how small the particles are. They tend to go deep into your lungs, so it is very important to take care of them. Weld fumes exist in the sub-micron size.

What's the Risk of Weld Fume?

Welding fume cause cancer, it's that simple. It's been classified as group one carcinogen by the World Health Organization. After last year, a large study was published made by the International Agency for Research On Cancer.

There were over 16 million participants into that meta analysis study, in which a half a million cases of cancer were discovered (over 3%). So this large study was released to the World Health Organization, who then changed the welding fume from a Group 2 to a Group 1 carcinogen. 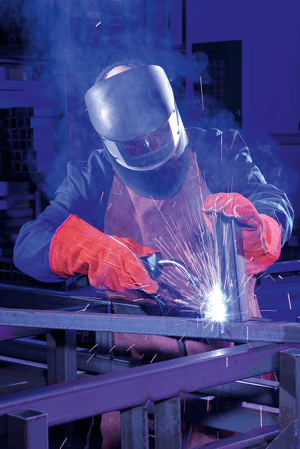 The other risk and hence reason to take care is that the welding fume is also toxic to humans in the short term. You will see some effects if you have too much welding fume around you, such as:

Fume fever is something that welders have experienced in their life. What that means for that moment, you are exposed  to so many particles and high levels of toxic elements into your body that you feel sick.

Longterm effects are our worst, and include:

The last important reason for caring about welding fume is it's unattractive for employees and unproductive for companies. Nowadays, it's hard to find good employees and retain them. This is especially true in welding and metalworking. If you have a clean environment and provide clean air to employees, this makes your company more attractive to work for and your workers more productive.

What is in Welding Fume?

At the most basic level, welding fume is a mix of metallic particles, chemicals and gases. Obviously, you take what's in the air, you burn a wire, and you vaporize the metal particles.

This process emanated from both the welding wire and the base material. Most metallic particles contain one or more of the following:

All these things  are bad for your health in short or long exposures.

They are so small that they get really deep into workers' lungs and they stay there.

That's why these submicron particles play such a big part of the hazards of welding fume.

Gases are divided into two groups all mixed together with the particles.

These are all mixed into the welding fume. Ironically, it is the process-generated gases that are to be considered more toxic for the industrial workforce than the shielding gas.

Finally, whatever is used for chemicals or left on the part to be welded contributes to the weld fume cloud, as well. These can include compounds such as:

These agents all get burned by the heat of the welding and they mix into the smoke. All of that makes it a pretty toxic fume accumulation.

When you deep into the welding fume knowledge, you encounter many tables explaining to you what you have to take care of, what's the level you're allowed, etc. You'll see a lot of acronyms like PEL, TLV, TWA, STEL, CTLB.

All these things, you have to know what they're talking about. A simple a list of what each term stands for and means is important to have and use.

These are both commonly used ways to measure metal particles and how much content in weight is part of your welding smoke.

There is also within the measurement of acceptable weld fume limits both regulatory limits as well as recommended limits.

Regulatory limits means you have a local regulation body that dictates you. These limits will answer your questions such as:

What you have to be looking at is the total amount of fume and some very dangerous particles like chromium or manganese that have specific levels just for themselves.

There's also recommended limits. They're recommended by associations or other bodies like the National Institute of Occupational Safety and Health or the American Conference of Governmental and Industrial Hygienists.

These governing bodies put forth recommendations, they look at the latest studies, and they guide both people and governments regarding what should be the next limit to be implemented.

Each are good resource to have to know where fume extraction and exposure limits are heading. I can tell you that it's heading towards reduction of the limits year after year after year. So, another good reason to take care of it now is that you can be ahead of the new limits that are going to go lower and harder to reach if you haven't started yet.

The message here is know what you're talking about, try to learn some of the vocabulary, and find your local legislation in limits, because it's different around the globe. American, Canadian and European bodies use different limits and sometimes different way to measure, so it's good that you're aware of your own local rules.

If you liked this blog, then we have the eBook for you! Download the Complete Guide to Fume Extraction by clicking the button below. No form fills to read. Simply click the button and begin.