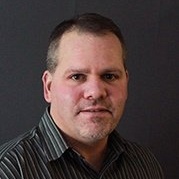 The robotic fume extraction landscape has featured few lean, advanced, and cost-effective solutions for manufacturers. While fume extraction for manual welding has experienced a significant spike in new solutions entering the market – from high-vacuum systems to multi-gun units, to countless new fume extraction gun concepts – robotics has remained ignored and mostly unchanged with minimal innovation to speak of.

The two main solutions employed until now are ambient air collection and robotic cell hood collection systems.  Those who have entered manufacturing facilities employing robots have probably seen at least one or even both of those systems.

While both of these methods have experienced wide adoption, and are effective in their own right, the limits of each are obvious.

With robotic cell hoods, you are generally limited to using these systems when you have smaller parts, which are introduced into the cell from the sides. Large parts requiring placement via overhead gantry are not suitable for Robotic cell hoods.

With ambient air filtration solutions, the objective is to attempt filtering all the air within the facility, which can be a considerable volume of air. The filtering is further complicated due to obstructions. For instance, columns, walls or even large machinery can block or trap air movement resulting in “dead zones” or pockets of inadequately filtered air. In addition, the dense fume laden air resists rising and exposes all plant equipment and employees to fumes prior to filtration; not just workers employed for the welding workstations. Ambient air filtration is a solution very prone to variables within each plant, and since these systems are sized to meet the space requirements when installed, they are not readily conducive to future plant expansion.

A huge drawback to both ambient air and robotic cell hoods is their installation and operational costs. Both solutions are quite expensive to install, operate, and maintain. Robotic cell hoods cost anywhere from tens of thousands up to a quarter million, and ambient systems can cost millions of dollars depending on the size and layout of the manufacturing plant.

Installation for either of these systems is likewise difficult. You have to work within the blueprint of the plant. Working around the columns and structures that exist within the plant is critical because of the overheard ductwork necessary. The most feasible way to implement system like these is to do so when the building is under construction, however future plant expansion either via increased arc density per square foot or building expansion will typically result in either an inadequate system or the requirement for an additional system. 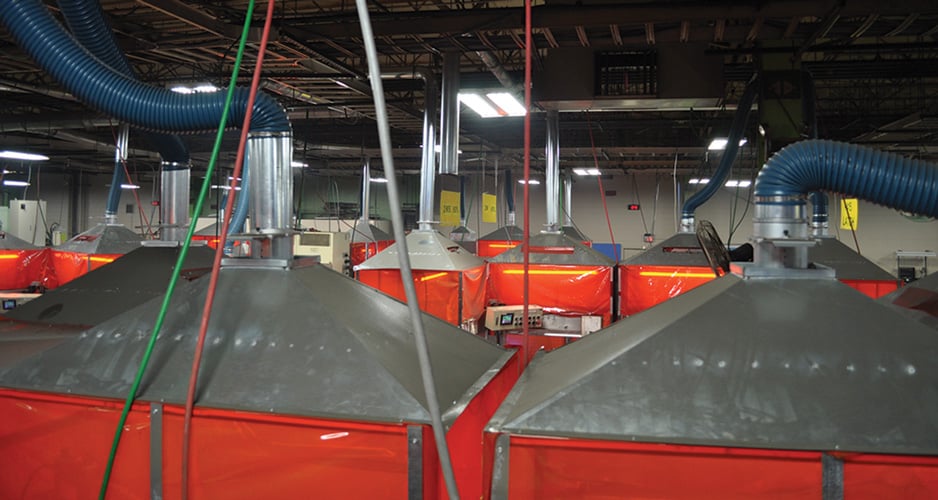 In robotic welding, although there is no operator in the work cell, the fume still migrates throughout the facility and workers encounter that fume regardless of whether they are close to the process or not. You cannot simply ignore robotic generated fume because an operator is not in the cell performing the actual welding. The entire plant ends up exposed and affected by the presence of weld fume when not dealt with properly.

One of the primary drivers for development of a source capture robotic fume extraction solution came from manufacturers searching for an easier to implement and more economical solution to existing technologies. These manufacturers also requested fume extraction that performed better than the current state-of-the-art technologies – that is, the traditional ambient air and robotic hood cell solutions.

Using a manual fume extraction MIG gun concept, the idea was to leverage existing technologies and develop a new solution for robotics, which would open up the front end of the torch for accessibility. In robotic applications collisions could occur and necks must be exchanged quickly and efficiently to increase uptime. This means that a fixed and rigid outer tube like on the manual welding fume guns would not work as well with robotics.

So where did the need for this specific application and solution come from? Again, the driver was customer demand for a lower cost, more technologically advanced, and easier to install fume extraction solution. More stringent standards established by companies wanting to take better care of their existing welders, reduce healthcare costs, and clean up the overall facility in the process was a huge driving force behind it.

Source capture robotic fume extraction works by means of a collector body, which attaches at the torch interface. The collector connects to a flexible hose, which extends back along the torch cable in over-the-arm applications or along the outside of the robot arm on through-arm applications. The small flex hose then terminates at a larger diameter hose, which runs back to a smaller extraction unit or mini network system. On the front side of the collector, a flexible suction boot surrounds the neck and draws in the fume without affecting shielding gas.

If you use robotic welding in tighter spaces, reprogramming might be necessary to ensure the collector body does not interfere with parts or fixtures. The flexible rubberized suction boot does allow you to push against objects and it will bounce back to its original shape. Ideally, a simulated run will make sure it can access the joint without crashing the robot. If interference occurs during the simulation, minor reprogramming will be required.

Anyone currently using a robotic welding process needing a fume extraction solution can potentially use source capture robotic fume extraction. If you are welding large style parts for heavy fabrication, a source capture solution may essentially be a plug and play remedy. Hooded cells could not accept large heavy parts, so ambient air systems were the only solution previously available, and those systems have their own limits due to upfront capital and the monthly energy consumption required to move the volume of air necessary for high parameter welding applications. 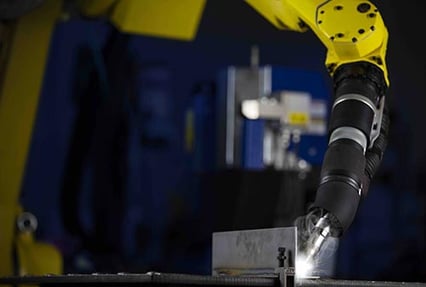 Other considerations to look at when considering source capture robotic fume extraction include:

ABIROB air-cooled hollow wrist source capture fume extraction kits allow the collector to remain stationary while the suction boot is free to rotate with the curvature of the torch neck. This concept eliminates fume extraction hose wrapping at the sixth axis. Over-arm and water-cooled hollow wrist fume collectors utilize fixed position suction boots, which may require a reduction in 6th axis rotational limits to avoid kinking the vacuum hose or damaging the collector body. In instances where 6th axis rotation is reduced, the added rotation can be incorporated back into the 4th axis. You could also pre-load the 6th axis in the opposite direction prior to beginning a weld to achieve higher rotation.

There are also extended length necks available for rare instances, which require reaching into a tight area where the collector body would otherwise contact the part.

Conventional robotic welding peripherals such as a nozzle reamer, wire cutter, or anti-spatter injector do not interfere with a source capture robotic fume extraction kit. The design of the suction boot allows the nozzle to dock into these peripherals as originally intended.

For highly automated type periphery, such as torch neck exchangers, the use of source capture robotic fume kits is not possible with these devices.  The reason the two are incompatible is that the collector body mounts over the neck and torch body housing in the same location that the torch neck would otherwise dock. If an automatic torch neck exchange station is critical to your process and you are interested in robotic fume extraction, you would be limited to an ambient air or hooded cell solution.

With maintenance, once the initial install is completed, servicing the front end is simple, because the consumables remain exposed. The rubber collection boot snaps off the collector body if replacement is required. The rubber boot is a wear item, which is easily and quickly replaceable.

The entire collection system that goes around the neck or torch body is removable in just a few minutes. If you crash hard enough, you could damage the collector, and at that point, you would have to replace the collector. With exception of the quick neck change robotic welding guns, the collector body will need to be removed in order to exchange the torch neck.

With all of these options, you are making three main considerations as you weigh the pros and cons of each:

With ambient air systems, there is an extensive planning phase, which could involve several departments and outside vendors. A substantial amount of design and install work is necessary to properly, and effectively install an ambient air solution. 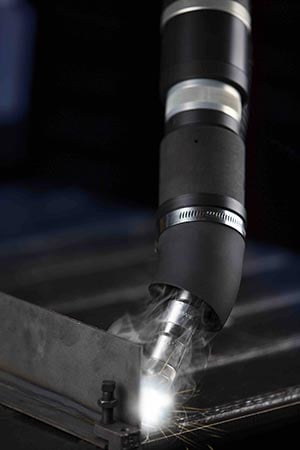 When considering performance, source capture in many ways works better than ambient systems at prohibiting weld fumes from emitting throughout a facility. The main reason is because it captures the fume closest to the arc. Due to the overhead location of ambient air solutions, there can always be fallout of harmful particulate, which can land on surface and be reintroduced into the atmosphere. This airborne particulate not only affects humans, but it can be drawn into the cooling systems of welding equipment, which can lead to higher operating temperatures and a reduction in service life.

All that you need to implement a source capture solution is the proper fume collection kit for your robotic torch and a suitable fume extraction unit. No permanent ducting or large air filtration system installation is required. You will be extracting welding fumes at a lower cost and in a more efficient manner than traditional methods.

For robotic hood cells, while they enclose the cell to keep fumes from traveling into other areas of the plant, they may still allow for particulate fallout within the cell. Given the high throughput of most robotic welding cells, that equates to a high percentage of harmful particulate, which finds its way onto the shop floor and exposes workers who need to access the cell to maintain the robot, perform tooling, maintenance work, or to simply transfer the finished part and load the next one.

One of the most obvious differences noted when comparing the traditional methods of fume extraction against source capture is cost.

Looking at ambient air collection, these solutions can cost millions of dollars when accounting for all of the factors that go into implementing such a solution, including system design, equipment, permitting and installation. Then comes the monthly energy cost associated with continuously cycling such a large volume of air.

With robotic hood cell systems, these solutions can run into the hundreds of thousands of dollars when accounting for the fume collector system, ductwork, permitting and labor. Some municipalities classify any structure with four walls and a roof (aka “cell hood”), as a room and require the installation of fire suppression equipment, which could easily double or even triple the system installation costs.

With source capture robot fume extraction, the primary investment is the fume extraction system itself, plus the extraction kit to affix to the robotic torch. To install this type unit on a single weld cell would cost under ten thousand dollars. Ongoing costs would be limited to the minimal energy cost associated with running the extractor only during arc on time, and the occasional filter replacement.

Fume extraction solutions for robotic welding have historically required major investments in time and expenditure to obtain what are often mediocre performance results.

When it comes to robotic fume extraction options, always consider the type of results you are seeking to achieve, the amount of capital you are willing to invest, and how much time and inconvenience you are willing to accept in order to improve plant air quality. Robotic fume extraction at the source can be implemented quickly and at a fraction of the cost of other systems, while providing superior performance to protect workers from the adverse effects of welding fume. This ultimately improves the working environment and adds more value to your manufacturing operation.