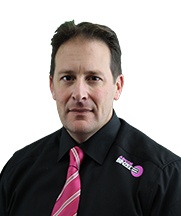 The cast is more important in robotic welding. Helix is naturally occurring and is easier to manipulate than cast. There's nothing you can do about helix. You can't take it out. There is no helix breaker.

Why Does the Weld Process Need Cast?

You need cast because of your contact tip. Your contact tip makes contact with the wire to help bridge current. If the wire doesn’t make contact on that tip, we run into microarcing and poor weld quality.

Based on how weld wire is packaged - via either a spool or a barrel - all that cast does is take a curved wire and send it through a straight body, i.e. the wire liner and torch body. When you do that, the wire incurs friction and, by design, rubs against the inner diameter of the contact tip. That's what's going to be your conductor.

You get all your power from your welder to your wire from the relation between the wire cast and the contact tip.

How Much Cast Should I Have? 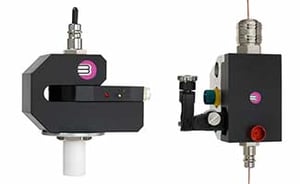 Understanding how much cast you should have is exceptionally important in a robot. There is a very big difference between cast issues in manual welding and cast issues in robotic welding. The reason robotic welding is trickier is because it always repeats the same positions. Therefore, there can be habitual problems that are very hard to trace.

Whereas, with hand welding, you're always changing the articulation or the angle of the torch. If you have a poor wire cast in a manual welding situation, you can manipulate the torch by hand. Many times when the welder's in position and they lift up their torch, that actually adds a cast anyway. Whereas in robotics, it's the opposite.

The other issue with robots, especially now that we run through arm torches or hollow wrist robots, it is now you've got more of a linear line than before with over-the-arm robots. The farther you pull weld wire, the more cast you can pull out of it. Straight wire is bad wire in anything but aluminum welding.

The first thing to do when checking your cast is to check the mate up between your consumables and your wire. This is exceptionally important because this will be a root cause for microarcing and burnback.

If you are noticing any potential cast issues, you'll want to deliver two to three feet of wire through your feed system using the feeder. Two things you do not want to do if pull it by the hand or take it straight out of the barrel. What it looks like in barrel will not matter.

You will care what it looks like after it's gone through the conduit. You care about what your feed rolls are doing. You care about the liner and going through the torch, the width and out the tip. The wire cast will ultimately be affected by the sequence that these items are put together.

These elements are either going to make it better or make it worse. You want to simulate exactly what you're going to do in production. In order to do this, I would recommend the following:

You should be able to hold the end of the wire and then slide the tip down the wire and feel a constant, positive contact through it. Ideally, that weld wire should be able to hold a contact tip on the wire without skipping down to the bottom. The contact tip should never fall straight to the floor. Instead, it should have enough friction in it with that cast to hold itself within that wire.

If you run into difficulty with running the wire up and down the contact tip, then you have a bad fit up between your consumable and your wire cast. When that happens it’s either because the inner diameter of your contact tip is too small or the wire is too large. Either of these symptoms will lead to premature wearing of your tips.

Having too much friction in the side of this contact tip diameter will create grooves inside the tip. Once the tip gets hot from the wire welding, it's actually going to erode it very quickly, and you'll see an elliptical split start forming at the end of the contact tip from this. Or if the friction is severe, you'll actually see it become conical, with the wide part of the cone out towards the tip, the narrow part being in from being spun within.

Pulling Wire Through the Feeder

With your contact tip friction also comes your wire delivery system. How hard is it to pull your wire through the system? This is important to know. If you have a heavy drag on your weld wire, and your feeder is pulling all that wire like a train locomotive, it is actually going to relax your cast and wear out your delivery system components. So it's very important to understand your wire feed delivery system.

To get a benchmark of your system in relation to the wire cast, what you'd want to do is release the feed rolls of your feeder and then pull the wire by hand from the contact tip.

You're trying to understand how much work the feeder is doing by performing this test. It's pretty subjective how much force it should take to pull wire. And everybody has an opinion on this and it's very much a feel thing. One person might say, "This one's nice." Meaning, it's perfect. And another person might say, "Ah. It's a little too hard." Or vice versa.

A lot of welding professionals within the industry use a fish scale to get the benchmark by tying the end of the weld wire to the scale and pulling. You’re looking to see how many pounds per foot or pounds overall would it take to pull the weld wire through.

My own subjective opinion is anything under 8 pounds is pretty good. Ideally, I’m shooting for 1-2 pounds, but it’s very dependent on the kind of wire delivery system used. Any system that uses rollers should have a lot less pull weight. If you’re over a weight that feels right, you’ve cranked down too hard on the drive rolls and need to loosen them up.

And anytime you’ve over-cranked the drive roll, you’ve altered the cast of the wire.

The farther or harder you have to pull this stuff, the more you're going to relax that path in the process. When that happens, you normally end up putting a wire straightener in so you can bring the cast back and do it backwards. This means you end up with a big, unclean wire feeding mess, and that's where your drive rollers and complex wire delivery systems really do make a big difference.

When you have overhead robots, gantry robots, you know your weld wire supply is 35-40 feet away from the robot. This is a common setup. The easier it is to pull that stuff through the system, the better your cast is going to be. Now, two things will happen. If you have too much cast, your welds will actually wander. And it's really hard to diagnose that because when welds wander, people think it's either the part, the fixture, or the robot. Rarely will one ever think, "Oh, there's too much bend in the wire."

And the problem is compounded by helix. Wire helix can twist every two inches or it can twist every two feet. What this helix does is it makes it look like your weld positioning is randomly changing and that is an exceptionally hard thing to troubleshoot if you're not looking for that. The characteristics of too much cast with wear out everything.

The drawback to not having enough cast is microarcing. Now, you're forming carbon deposits inside your tip. You're having lots and lots of downtime from the wire sticking to the inside of the fit, and anybody who's ever welded with a robot has seen this before. At one time or another, they walk into their cell and go to cut the wire and it won't move. They go to cut it and all of a sudden now it moves and it seems fine. 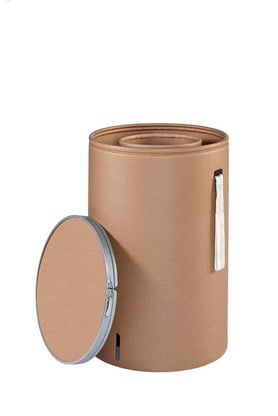 A very good way to troubleshoot casting issues is to change the wire source. Usually cast issues are from barrel packs of wire. Whether it’s 500 pounds or 1,000 pounds, the barrel packs of weld wire tend to be a greater source of wire caste issues than smaller spools. Because when you wind wire around a core in a spool, it has a much tighter, heavier cast than if you drop it into a bucket, which is how barrel packs are made.

The best remedy to microarcing due to wire cast is to take off that barrel pack just for a little bit, and put on a 30 pound spool. That microarcing will go away. You'll see it almost instantaneously. What this means for you is you’ll have to closely follow your wire feed delivery to ascertain whether you need to add or subtract cast in the wire to avoid microarcing from the wire barrel.

With cored wires, you're going to feed cast that's held onto in the cored wires a whole lot more than you will on a solid wire. That happens because you have a smaller cross section of actual solid metal in there. This means it will hold that shape a little bit better.

Solid wires tend to straighten out a little bit better from these barrel packs that I alluded to in the last section.

A cored wire will have more cast until you pull it. If you think of a solid tube versus a pixie stick, a pixie stick is a tube with a bunch of sand in it. And when you get into flux core wires, because there's less material, metal material on the outside, it will actually have more cast in the barrel. However, when you pull it through the system, that cast relaxes much, much faster than the solid core because the solid core has more spring to it because it's solid.

Aluminums are likewise completely different. Aluminum cast is almost negligible. It has a great cast around the core and then as soon as you pull it out, it's straight as an arrow. You don't have microarcing issues with aluminum, either. It's usually a steel, stainless steel, galvanized type wire where you will encounter more of that kind of problem. Delivery systems, however, are very important with aluminum.