How to mitigate welding fume is a big topic. People, by instinct, oftentimes say, "Oh, I'll put a mask on and that'll be sufficient"

Now, however, there is a systematic approach that's been used by OSHA or any health and safety offices. Now, the approach is to start looking at the process, and starting at the bottom of mitigation pyramid and systematically moving up. 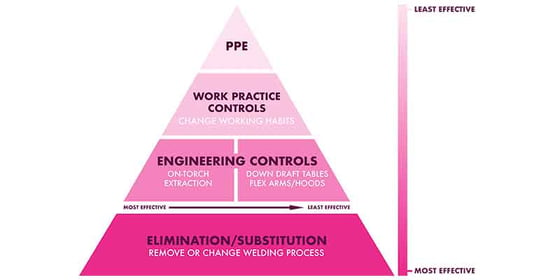 Eliminating or Substituting the Weld Process

The first question to ask is if it is possible to eliminate or substitute the process that's causing the fume? Obviously, most of the time it's not possible to remove welding from the operation. But it's worth considering if you are using stick welding or flux core welding whether you can substitute this process for a better process as far as smoke creation?

If elimination is not possible, substitution or improvement of the process normally is possible. Going from a standard MIG welding to a low fume wire / low fume gases and pulse mode would reduce the number of metallic particles you release into the air.

From most effective to less effective means, we move up that pyramid. Engineered controls, meaning on torch or on tool extraction, is capturing weld fumes right where the toxic element is created or released.

You use the engineered solution to act on it and catch it right there, at the source. Apart from a change in process, this is the most effective way to mitigate weld fumes within an industrial plant. This would involve a fume extraction welding gun and paired system, for example.

Other controls that are part of the engineering control would be downdraft tables or flex arm hoods. Locally, you take care of the smoke as close as you can to the release, you capture it and you filter it, which allows you dispose of it safely while protecting your workers.

The more we go up the pyramid, the less effective it is and the more dependent on people it is. Next is work practice control. That means you change the way people work, the way people approach welding, how they position themselves.

Forcing people to use an arm or to put a part under a hood means not only using some engineered controls, but also implementing some changes into your manufacturing operation.

That's less effective, because you have to keep tracking what people are doing. So it's not like if you have fume extraction via a tool, where everything is controlled by the tool you're using.

Finally, the last resource is to put personal protection. A common instinct of people is to believe putting good filtration or a good mask on my welder is adequate by itself. Well, it's good for the one person wearing the mask, when the mask is worn, but it's not good for anybody around, or the moment you lift up the mask, you're back into a contaminated area.

It's why often industrial health experts will recommend it as the last resource after other options are exhausted. It does protect the welder, but nothing around is actually taken care of. It does help unquestionably, but it's not the first thing you do as part of the process.

How to Mitigate Weld Fume

Looking at how to mitigate welding fume, another aspect of it is how much energy and cost it takes for each of the different approach. If you remove it right at the source, an example is a source capture fume extraction torch, you would need somewhere in the 170 m3 per hour or in imperial measurements like 100 CFM. That's all it takes to extract most of the smoke right at the source using a MIG gun or a high vac funnel.

If you move away a little more, by using a flex arm, for instance, you use around 1000 m3 per hour. That is 10 times more than extracting right at the source, and the cost of it becomes more because moving more air gets more expensive.

For hooded extraction systems, the air volume need is again greater. The volume that you have to extract if you're catching the smoke with the hood is in the range of 2000 - 6000 m3 per hour, and it can go up. If the hood is bigger, you need more volume to efficiently extract the smoke going up. 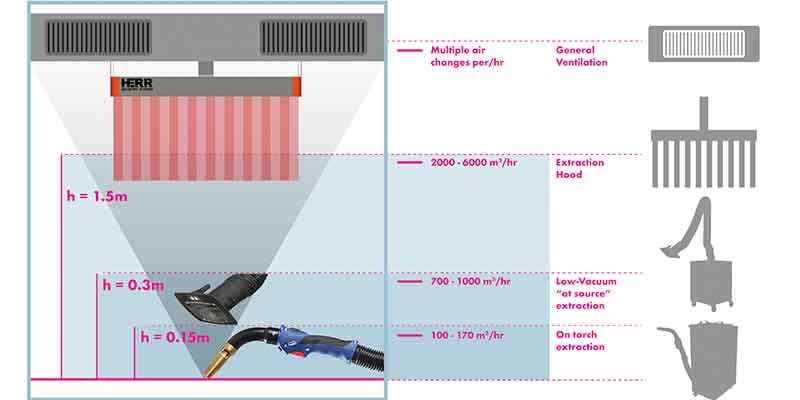 If you look at the graphic above, the density of smoke dissipates as it travels up. So it's less effective, it takes more volume to get rid of the particles.

The engineered system that's farthest away would be general ventilation, which requires multiple changes of air per hour.

As a fume extraction solution, it's the least effective and most expensive way to control smoke. In the midst of it functioning as it should, anybody walking around or within the zone where weld fume density is high but not yet captured is in a spot where they come in contact with the fume, which exposes them to health risks.

If you liked this blog, then we have the eBook for you! Download the Complete Guide to Fume Extraction by clicking the button below. No form fills to read. Simply click the button and begin. 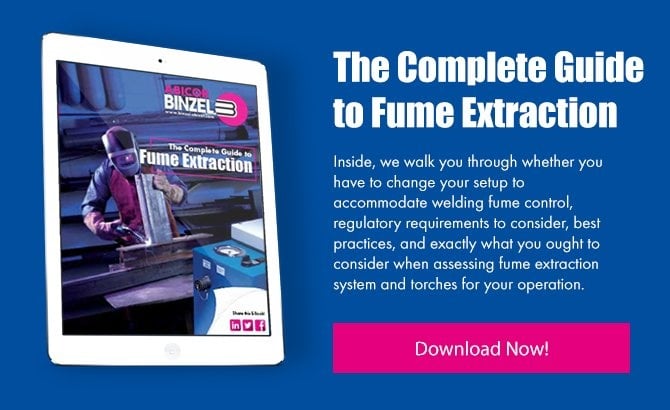